Where do five-lined skink live?

A small lizard restricted to North America is the American five-lined skink. In the eastern U.S., it is among the most prominent lizards and one of Canada's 7 native species of lizards. Young skinks with five prominent white to yellowish lines running along the body and a light blue tail are black or brown in color. With maturity, the blue color blends to light blue, and the stripes will slowly fade away as well. Frequently, the brown to black hue disappears, and elderly individuals are mostly predominantly brownish.

In Canada and the United States, American five-lined skinks are identified. Their range includes southern Ontario, Michigan, and eastern NYC in the north. Minnesota, Missouri, and eastern Kansas, Nebraska, Oklahoma, Florida, Mississippi, Louisiana, and Texas have the western boundary. Such lizards prefer humid, partly forested habitat that offers adequate shelter, trees, and sun-basking spots. They live on the edges of the forest, mixed pine-hardwood woodland, along the wooded borders of the river, in mountainous outcrops, stumps, logs, debris piles, or derelict houses within walls.

American five-lined skinks are species that are floor-dwelling but can also climb a tree. Throughout the day, they are active and will flee quickly if confronted and disappear in the nearest tree or log. American five-lined skinks, like so many other lizards, can lose their tails when the predator is trapped or threatened; this helps the lizard to confuse and avoid future predators. American five-lined skinks are normally herding creatures, but during the winter months, they will hibernate in small groups. Adult males show complicated intimacy and aggressive behavior. While in their areas, males tolerate juveniles and females, they actively protect these areas against all other males. These lizards use their sight and their ability to detect pheromones in order to ascertain the gender of other skinks. 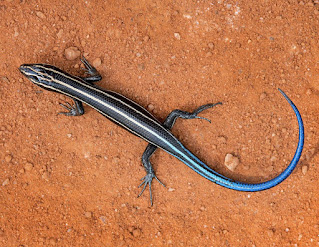 American five-lined skinks are polygynous, meaning that throughout the mating season, males mate with more than one female. In May, these lizards proceed to reproduce. The female will lay her eggs for at least one month after breeding, and the young hatch for 4-6 weeks after fertilization. Consequently, the phase of giving birth consists of egg-laying and external incubation. In a small cavity cleared beneath a rotting log, stump, sheet, loose bark, a rock, or an unused rodent burrow, females lay 15-18 eggs. In regions where moisture content is higher than in neighboring areas, females also position nests. In order to decrease egg loss, even when spawning sites are not restricted, females can gather in collective nests.

Females may rotate foraging and nest guarding in communal nests, leaving the eggs safe at all times. Females can also urinate and turn eggs in the nests to preserve moisture. The time of incubation ranges from 24 to 55 days and varies because of temperature variations. During this time, females usually broil their eggs, defending them against smaller predators. Parental care ceases when hatchlings leave the nest a day or 2 after hatching. Within 2-3 years of hatching, young skinks reach adult size and begin breeding.