What is Goliath birdeater?

The Goliath Birdeater (Theraphosa blondi) falls to the Tarantula group which is the most large spider on the planet, weighing in at up to 6 ounces. It can develop to a height of approximately to 11 inches, has a fist-sized body and is comparable only to the spindly Great Huntsman in leg length. Female will live for up to Twenty years. It is an apex predator, which means that it is typically waiting for prey to cross its course, rather than trying to track down food.

The Goliath bird-eating tarantula is the largest global tarantula. With a leg span of close to Eleven inches (28 centimetres), the body reaches up to 4.75 inches (12 centimetres).

Like any tarantula, T. Blondi spiders have fangs wide enough just to split a person's skin (2-4 cm or 0.79-1.57 in). They hold poison in their fangs and, when provoked, they are prone to sting, but the poison is pretty harmless and its results are similar with those of the sting of a wasp. In particular, tarantulas bite people only in self defense, but these biting do not necessarily lead to toxicosis (called a "dry bite"). 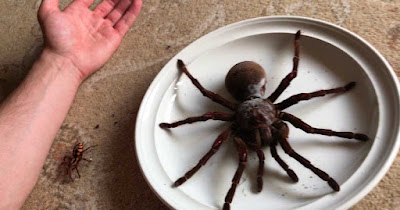 A Goliath Birdeater is a good pet by a well trained person who knows how to handle this spider, but for inexperienced it is not recommended. Although the total length of this spider is so large, it needs a much larger ecosystem than other varieties of tarantula, and has larger fangs as well. Please do your analysis first before considering this species as a pet.

Goliath birdeaters do have vision problems, unlike jumping spiders. Rather, they depend on changed vibration-sensitive leg hair to alert them of danger. The Goliath has an odd tool if a predator like coati comes too close: harpoon-shaped hairs (called urticating hairs) tipped with stinging barbs. The spider rubs its legs together, tossing into the air a shower of miniature projectiles.

These urticating hairs are used by female Goliaths to cover their large egg sacs, which contain between 50 and 150 eggs. Hatchlings remain close to their mother until they are two to three years old at full maturity.