It is the 1st ever radioactive drug introduced and also known as radiopharmaceutical. There are two main reasons behind approval of this drug 1st one is randomized clinical trial which consist of 229 patients treated with Lutathera drug and chemotherapy drug i.e. octreotide. In this case, Lutathera increased progression free survival rate of patients. 2nd reason is clinical trials based on 360 patients and only Lutathera drug is administered. As a result tumor got shrink in about 16 percent of patients. 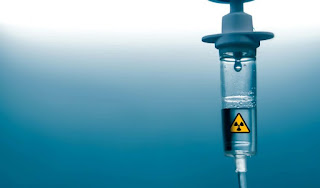 
Lutathera drug is available in the form of an intravenous dosage form. It is available in two strengths i.e. 370 mBq/ml single dose vial and in each vial solution volume is adjusted from 20.5 to 25 ml in order to provide 7.4 GBq of radioactivity per vial. In case of neuroendocrine tumors, 7.4 GBq IV 4 times a day for about 8 weeks is administered with other medications. Dose adjustment is required in case of renal and hepatic impairment, pregnancy and lactation, thrombocytopenia, anemia and neutropenia, renal toxicity, hepatotoxicity and other non-hematological toxicity.


Lutathera drug is a radioactive drug used for treatment of gastroenteropancreatic neuroendocrine tumors. It is administered with pre medications and concomitant medications. Long acting somatostatin analog should discontinue at least 4 weeks before Lutathera drug treatment. Patient can take small acting octreotide if required. During Lutathera treatment, long term Lutathera can be administered. If antiemetic are prescribed, then it should be administer almost 30 min before lutetium treatment. Amino acid solution in intravenous form should be initiated before Lutathera treatment. A 3 way valve is used for this purpose to inject both solutions via same venous access.