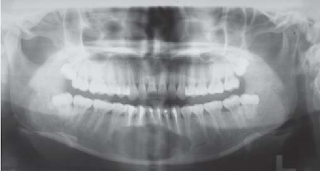 
Adenomatoid odontogenic tumor is a dental tumor which involves the enamel if associated teeth. It is also termed as hamartomatous. It may occur due to a lesion in the maxillary or mandibular jaw. Adenomatoid odontogenic tumor is benign in nature. It is a rare type of tumor which mainly effect females at the 2nd  decade of their life. Lesion may occur due to a maxillary canine teeth which is impacted. Impacted canine is the common cause of lesion, but it may also occur as a result of hard food particles during chewing and swallowing.


Treatment of adenomatoid odontogenic tumor involves surgical removal of cells. And this specific surgery is known as enucleation. In enucleation, the mass or tissues which are involved in tumor are surgically removed without any dissection or cutting of lesion. It can be performed for eyes, oral cavity and uterine tumors. In enucleation, the tissues which are soft and hard , both are removed surgically. Only those tissues are removed which are involved in lesion. This is the only type of treatment for adenomatoid odontogenic tumor which is effective. As there are no symptoms, so no medications are used for the symptoms.