✔ Mazz 1:00 AM
Waiter's tip deformity is another name of Erb's palsy or Erb duchenne palsy. It is the paralysis of arm due to the injury in upper group of nerves of shoulder. The veins of the upper trunk i.e. C5 - C6 nerves got severe. These nerves collectively forms the brachial plexus which consist of ventral Rami of spinal nerves i.e. C5 - C8 and thoracic nerve i.e. T1. The injuries of above mentioned nerves may arise from shoulder dystocia during difficult baby birth. In Erb duchenne palsy, paralysis may resolve on it's own after a few months of period.

Sometimes it needs a rehabilitation therapy or surgery (according to the severity of Erb duchenne palsy). Waiter's tip deformity may be partial or complete. Whenever a single nerve got damage, the damage starts from bruising to tearing. The most common nerve involved in waiter's tip is C5. This condition is called as Erb duchenne palsy because the junction of C5 and C6 roots is known as Erb's point. Erb duchenne palsy is also presented as a lower motor neuron syndrome which is mainly associated with disturbances in sensibility and vegetative phenomenon. Musculoskeletal nerves, suprascapular nerves and the axillary nerve are mainly involved in waiter's tip. 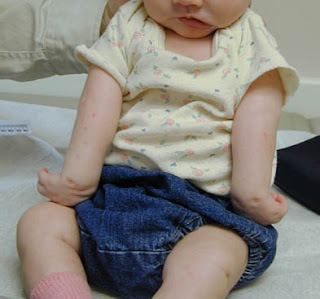 
Basically waiter's tip is the main symptom of Erb duchenne palsy, so the causes of Erb duchenne palsy are considered the causes for waiter's tip. Dystocia is considered the most common cause of waiter's tip. Dystocia is the difficult or abnormal child birth or labor. It can be described with an example during labor, when the head and neck of infant is pulled towards side , at the same time, the shoulders pass through birth canal. It can also occur due to excessive pulling of shoulders during delivery of fetus with head first out.


If it occurs during child birth, then it can resolve on it's own after a time if few months. But those babies who does not recover on their own may require special intervention. Paediatric or neonatal surgery is performed for the repair of avulsion fracture. Sometimes when the lesions heal with the passage of time, the function of shoulder returns. Physiotherapy is an important treatment strategy which helps a lot in regaining proper functioning of shoulder. The range of motion of shoulder in children may receiver within one year of their birth. It it took more than 1 year, then surgery becomes necessary.