✔ Mazz 1:00 AM
Eye color is the phenotypic character. It usually depends on two main factors 1st one is the pigmentation of eye's iris and 2nd one is scattering of light dependence by turbid medium of the iris (stroma). The pigment in the iris depends upon the concentration of melanin in the iris epithelium. Green color of eyes is rare. In case of green eyes, the pigment in iris may vary from very light Amber yellow to to a very dark brown with black borders. Green eyes have low to moderate level of melanin in the iris. As high level of melanin gives black color to eyes. 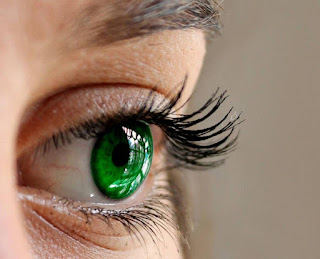