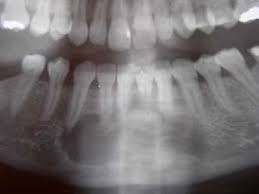 
It is an oral cavity pathological condition in which the gums become swollen. It usually occurs on the upper jaw line in between front teeth. Peripheral ossifying fibroma may be pink or red in color. The surface of fibroma may be smooth or irregular pebbled one. The lessons may be small or very large in size. It may be ulcerative or not. Commonly the peripheral ossifying fibroma is red in color and is ulcerative. The lump of fibroma grown outward and is less than 2 cm. It is slow growing and may take months or even years to be visible enough for treatment.


Before starting treatment of peripheral ossifying fibroma, the diagnosis is an important part. For diagnosis, the excised part of fibroma is sent for examination. Teeth are rarely extracted. In addition to this, the predisposing factors like plaque and calculus formation should be treated. Dental prosthesis should also be treated because it leads to irritation and ultimately forms peripheral ossifying fibroma. The occurrence rate of this fibroma is 20 percent and it may re-occurrence within the 12 months of excision. In case of no surgery, the lesions may become larger in size and makes the condition worse.